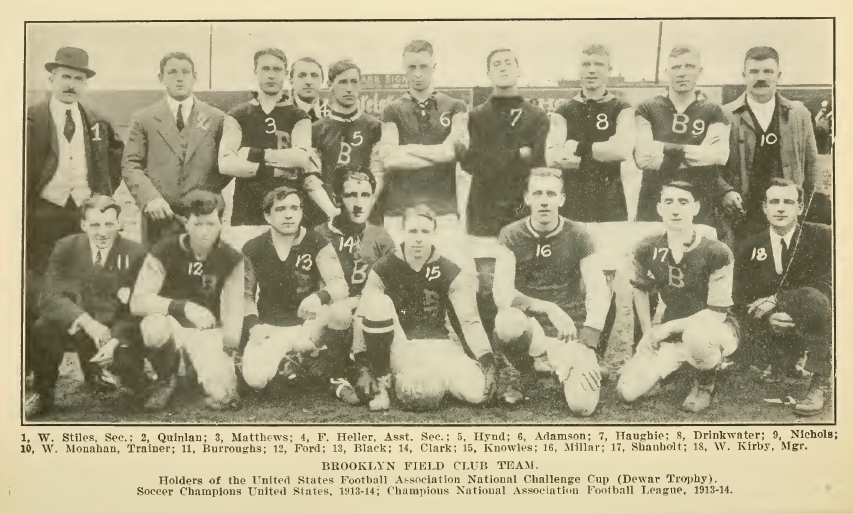 TheCup.us introduces “The First Cup” series, which revisits the first running of the Lamar Hunt US Open Cup (then known as the National Challenge Cup) that took place from the fall of 1913 to the spring of 1914.

Editor’s note: As you read this, you’ll notice a lot of players with just one name. This is not an oversight on our part, but rather, many of the sources of this information (newspapers, publications etc.) only use the last name of players in their stories. If you have confirmation of any of their names, or any other details that would add to our historical records, feel free to reach out to us HERE. We are always looking for help with historical research.

Links to the full series are located at the bottom of this story.

It was announced today in the Philadelphia Inquirer that Bethlehem FC was protesting their 1-0 third round loss to Brooklyn Field Club.

In the protest filed by Bethlehem manager Trand, a number of objections were brought up. First, Brooklyn was over a half-hour late to appear on the field. Bethlehem’s argument was that referee Charles E. Creighton should have either forfeited to Bethlehem or started the match before the Field Club team came out.

Support TheCup.us and its coverage of the US Open Cup by purchasing a “Champions” shirt, honoring the five clubs from the pre-Modern Era (1914-1994) to win four or more US Open Cup titles. Visit THECUP.US SHOP

The rest of the protest centered on a number of players Bethlehem felt should not have been eligible to play. Bethlehem contended that H.H. Shanhold and H. Hynds should have been ineligible because they still had a case pending against them from an American Football Association cup game for accepting payment as amateur players.

Bethlehem, who became Bethlehem Steel FC the following season, also questioned Hinds’ eligibility on the grounds that he never signed a National Challenge Cup form, as well as goalkeeper W. Haughtie, whom Bethlehem claimed was not on the roster received from Brooklyn before the game.

The third round game between St. George and Peabody was forfeited to Peabody on the grounds that St. George could not put together a strong enough team to travel to Philadelphia. The game was originally scheduled for Jan. 24, but the grounds were deemed unplayable.

THE FIRST CUP SERIES (THECUP.US)
A detailed look back at the 1913/1914 National Challenge Cup