100 years ago, the Lamar Hunt US Open Cup (then known as the National Challenge Cup) crowned its sixth national champion. Prior to the 106th edition of the US Open Cup Final last month, TheCup.us begins a five-part series that jumps in a time machine back a full century to see what obstacles the 1918/1919 tournament faced. The game and the world itself was very different 100 years ago. World War I was wrapping up in Europe and there was an outbreak of the Spanish Flu around the country. The United States and the game of soccer were likely unrecognizable to the modern fan, so we decided to take a look back to see how it all played out.

Editor’s note: As you read this, you’ll notice a lot of players with just one name. This is not an oversight on our part, but rather, many of the sources of this information (newspapers, publications etc.) only use the last name of players in their stories. If you have confirmation of any of their names, or any other details that would add to our historical records, feel free to reach out to us HERE. We are always looking for help with historical research so we can continue to tell these stories for future generations.

Check out the other entries in this five-part series: Round 1 | Round 2 | Round 3 | Quarterfinals | Semifinals & Final

The Eastern bracket’s third round schedule kicked off on Dec. 21 in Pawtucket, RI as J & P Coats played host to Fore River FC. Fifteen minutes into the game, the Shipbuilders from Quincy, Mass. opened the scoring when Daly drew the Coats defense out with a run up the middle before passing to Andy Straden, who put Fore River ahead 1-0. Coats responded 23 minutes later when Turner sent a corner kick into the goalmouth where Allcock easily headed it home to tie the game. Fore River took the lead back just three minutes later through Jack Kershaw’s seventh goal of the tournament. Kershaw took hold of a cross from Straden and came in so fast on the shot that he lost his balance and crashed into the goalpost, injuring his knee and forcing him off the field for the remainder of the half.

Coats held the advantage early in the second half but missed several good chances to equalize. By the end of the game, Coats were clearly slowing down, and Fore River took advantage. With five minutes remaining, Brown extended Fore River’s lead to 3-1, and two minutes later, Straden scored his second of the game from the penalty spot after Kershaw was fouled.

The next day Paterson FC (N.J.) traveled to Todd Field in Brooklyn to face Robins Dry Dock. The game was a half-hour late in kicking off, which would be an important fact later on. After a scoreless, evenly-played first half, Paterson took control early in the second half and at the 55 minute mark, scored the first goal when Bobby Lennox tallied from a Davey Brown pass. Paterson stayed on the attack and seven minutes later got their second goal. Future Hall of Famer Archie Stark sent in a hard shot that Robins’ goalkeeper Wilson cleared, but before Wilson could regain his footing, Rudy Hunziker sent in a high shot for a 2-0 lead. Around the 70th minute, Robins finally broke through when Monroe’s corner kick found the head of fullback Laverty.

In the 75th minute, referee Cunningham put a halt to the match due to darkness. Robins protested the game, citing the half-hour delay in starting the match. The United States Football Association (USFA, now the United States Soccer Federation) ordered a replay back at Todd Field, and Paterson did not fight the decision.

The teams met again at Todd Field on Dec. 29, and Paterson held a 2-0 halftime lead on goals from Harry Bleisch and Stark. Robins struck back ten minutes into the second half when Ernie Garside headed in a Laverty corner kick. Fifteen minutes later, Robins had another corner kick, which was cleared by Paterson defender Murray. Hunziker took hold of the ball and raced down the field with the Robins team chasing him, scoring with a high shot that just missed the crossbar, finishing the scoring and giving Paterson a 3-1 win.

On the same day as the Paterson-Robins replay, Scottish American FC played host to New York FC at Clark’s Field in Newark, N.J. The New Yorkers came away with a relatively easy 2-0 victory. Kelly converted a penalty kick after 30 minutes, and Young netted a pass from J. Vandeweghe after ten minutes of the second half to put New York into the Quarterfinals.

The final game of the round in the East kicked off at Clark’s Field in Newark on Jan. 5, with Federal Shipyard and Morse Dry Dock playing to a scoreless draw after extra time. The replay a week later at Lenox Oval in New York featured many more goals. John Sullivan, who played with 1918 Cup champions Fall River Rovers, scored the opening goal for Morse after 12 minutes. Fifteen minutes later, Fisher put the Federals level off a cross from Edmonson, and soon after, Ingram’s shot glanced off Morse defender McCann for a 2-1 Federal lead. O’Donnell put Morse level in the second half, and the score stood at 2-2 through the end of 90 minutes. In extra time, the Federals defense fell apart and Morse scored three times in the first fifteen minutes with O’Donnell scoring from a scrimmage, and Sullivan netting two off passes from Colgate and McNaughton. 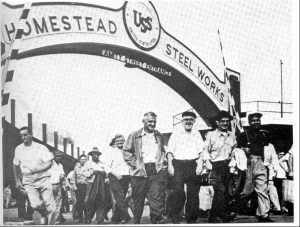 All three Western third round games kicked off on Dec. 22. The fourth game, scheduled between Bethlehem Steel and Homestead Steel Works, was a walkover for Bethlehem when Homestead was forced to withdraw due to being short players coming back from World War I. Ironically, Homestead won by forfeit in the second round when Pittsburgh FC had to withdraw for the same reason. The Steelmen, who already held the tournament record for the longest unbeaten streak with 19 (1915-17), extended their latest streak to nine games.

In Chicago, Bricklayers and Masons moved on to the Quarterfinals with a 2-0 win over Scottish American FC. Dixon scored the first goal when he scored from a rebound off a shot by Bromley that struck the crossbar. Soon after, Ton took advantage of a miskick from a Scottish American defender and sent in a shot that was partially blocked by goalkeeper Brichall but rolled into the goal.

In Akron, Ohio, Goodyear rolled past Cleveland’s Magyar American FC, 6-1. Although the Hungarians played with just 10 men, they managed to hold Goodyear to a 1-1 halftime score. Goodyear took advantage of the handicap in the latter half, scoring five unanswered goals. Pidwell tallied twice for the Akron club with Simpson, McDonald, Valentine and Hardman supplying the others. Bolke scored the lone goal for Magyar. The Magyars protested the game because of the poor condition of Seiberling Field, but nothing came of it.

The game of the day took place at Solvay Park in Detroit, where a pair of Motor City teams squared off. Roses FC outlasted Detroit FC 4-3 after extra time to advance to the Quarterfinals. Roses began the game with several good chances and capitalized when Fishbach put the ball into the back of the net. The tide turned Detroit FC’s way when they were awarded a penalty for a Roses handball, and Miller converted the spot kick to tie the score. Early in the second half, Miller scored his second to put Detroit up 2-1, and near the end of the game McLive saved Roses with a goal to send the game to extra time.

Detroit regained the lead in extra time when Shankland passed to Hornsby, and after the goalkeeper blocked the cross into the goalmouth, Shankland swooped in and scored on the rebound. Early in the second period of extra time Dyson made the score 3-3, and the Detroit Free Press noted that the pace of the game got faster despite the extra half hour. Just before the final whistle blew Dyson struck again to send Roses into the Quarterfinals.

*Match abandoned in the 74th minute due to darkness & rain, Robins protested due to game starting 30 minutes late (Replay ordered)