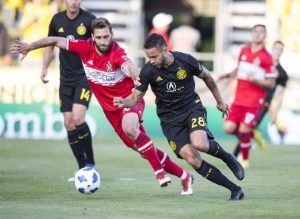 Chicago Fire and Columbus Crew players battle for the ball in their Fourth Round match in the 2018 US Open Cup. Photo: Columbus Crew SC.

For the second year in a row, the Chicago Fire had to go to a shootout to determine a winner against an Ohio team. This year things were different. After falling to FC Cincinnati in their magical cup run, the Fire were able to come out on top against league rivals Columbus Crew SC, a 10-9 penalty kicks win after a 2-2 draw in the Fourth Round of the US Open Cup.

Chicago started many of their offensive starters, while Crew SC opted for a lineup full of reserve players. Still, it was Columbus who struck first in an sloppy — but even — first half. After a bad turnover, Niko Hansen was able to feed Cristian Martinez for an open look that the Panamanian buried. Columbus came close to taking a lead into the half, but Nemanja Nikolic found the back of the net at the buzzer after a perfect cross from Rafeal Ramos.

The deadlock would hold until extra time, when Nikolic again found the net in the 109th minute. Crew SC keeper Logan Ketterer parried a shot away, but the ball dropped right at Nikolic’s feet for an easy goal. Somehow, Columbus was able to strike again just five minutes later with Adam Jahn powering a shot past Richard Sanchez. That brought the game to a shootout.

Nikolic took the first kick and missed, giving Crew SC the advantage. But Hector Jimenez missed the second attempt for Columbus, and Chicago wouldn’t miss again. It came all the way down to the keepers, and Sanchez scored on Ketterer and was able to then stop his Crew SC counterpart to advance Chicago into the round of 16.

“If you [had] told me my first game [with Crew SC] was going to be 120 minutes and 11 rounds of PKs I’d tell you that you were crazy,” Ketterer said. “It was a great experience, tons of credit to the guys, for battling for that long, getting that goal. Going until the end, just like that Toronto game last weekend. It shows a lot of the character that is in this locker room.”

“I don’t recall taking a PK in these circumstances, but you do train for them,” Sanchez said. “You train for them during practice and I myself train them, so it feels good. It gives me confidence. I think it gives the players confidence as well for the ones that made it and we just continue to build from this.”

Head Coach Veljko Paunovic was pleased with his squad.

“I think it was important to advance to the next round,” he said. “I think it was a huge effort from the team. Both teams I think did a huge effort today. I think we both tried until the end. It literally decided the small detail, with the PK spot. The last player had to take it, the goalkeepers in this case. I think it is good for us to get this win in the Open Cup and it’s very important for our club.

This very important competition gives us more confidence to move on. Not only in the next round, but in the next couple of games, the next stretch of games we have at home and on [the] road.”

With the win, the Fire remain unbeaten (5-0-1, 1-0 PKs) all-time against the Crew in US Open Cup play. The four-time champions also maintain their unbeaten record (8-0-2, 2-0 PKs) in Fourth Round games.