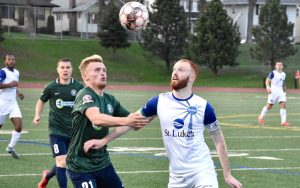 Players from Saint Louis FC and Duluth FC battle for the ball in the Second Round of the 2018 US Open Cup. Photo: Duluth FC

The United Soccer League (USL) club from Fenton, Missouri, ventured north to Duluth and delivered a fatal blow to the Bluegreens’ Lamar Hunt US Open Cup aspirations in a midweek inter-league clash at Public School Stadium.

Saint Louis FC seems to have a knack for knocking off teams from Minnesota. The USL club has done it twice in the last three years, and its latest triumph came Wednesday in a 2-0 victory over Duluth FC of the National Premier Soccer League (NPSL) in the Second Round of the US Open Cup.

Always the underdog in the match, the Bluegreens worked hard to mostly contain the smooth-sailing team from the Show Me State, but found few genuinely good opportunities to make their mark on the match, while the visitors had less trouble finding space and creating scoring chances.

After signaling its intent with four early corner kicks, Saint Louis FC finally broke through with a goal in the 25th minute, when Kadeem Dacres scored to make it 1-0 on an assist from Corey Hertzog

Dacres was at it again 10 minutes later, this time helping out from the wing. He took possession in space on the left flank, and served a cross into the box for Hertzog, who buried the header from close range to double the lead for the guests.

With a cushion to start the second half, Saint Louis settled into a bit more possession early on, working the ball around with crisp passing and good movement off the ball. Equal parts disciplined and direct, the visitors continued to create chances in and around the box. Several timely blocks from Duluth defenders, however, kept Saint Louis off the board for the remainder of the match.

The Bluegreens also had their chances, especially late in the match after head coach Joel Person opted for two sets of fresh legs, but they couldn’t quite deliver the final product.

“That was part of the game plan,” Person said. “We talked at halftime about if we were still in striking distance, a goal or two with about 20 minutes left, we were going to change the formation and start pushing things forward. The momentum really started to shift and we started causing them problems because we were able to press them more effectively. And it worked, we just weren’t fortunate enough to get that goal. But I couldn’t be more proud of the guys.”

More importantly, after leaking goals against division opponents in the first two outings of the season, Duluth looked stronger defensively, and held the USL side scoreless in the second half.

“I’m really proud of our performance, specifically our improvement over the last week,” Person said. “We played our first game a week ago, and we’ve had some errors and gave up some easy goals, and we sorted a lot of that out tonight. Yeah, they’re a pro team, so they caused us some issues, but we worked through those as well. We tied a professional team nil-nil in the second half, and toward the end started putting them under real pressure.”

Known in local circles as the Chupacabras, presumably because supporters never imagined they would see a professional club come to the Gateway City, Saint Louis looked like a team in midseason form, and showed the fans in attendance why it belongs in the second division of the American soccer system. Despite the plucky performance from the home side, the Battle of the Bluegreens ultimately tilted in favor of the visitors.

Of course, this is not the first time Saint Louis FC has bounced a team from the Land of 10,000 Lakes from this tournament, though it was a bit more tooth-and-nail back then.
In 2015, the club’s inaugural season, Saint Louis hosted and eliminated the NASL incarnation of the Loons in the third round of the Open Cup 3-1 on penalties after a 1-1 draw in regulation. In a pitiful showing in the shootout for United, only Miguel Ibarra hit the back of the net.

Next, Saint Louis moves on to the third round to face Louisville City on the road next week.