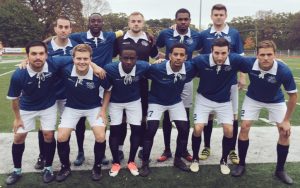 Stegman’s SC made the trip down to Mooseheart, Ill., about an hour west of Chicago, to take on Aurora Borealis SC in the second round of the 2018 US Open Cup qualifying tournament. In the end, after a wet and rainy game, Stegman’s prevailed, 3-2, on the strength of an extra time goal by Nick Hutton to send the Minneapolis-based club into the final round of qualifying.

A kickoff that clashed with both the Chicago Bears and Decision Day in Major League Soccer, led to a sparse crowd witnessing a tightly contested battle in miserable conditions, eventually justly shaded by the visitors.

Aurora opened the scoring after about 15 minutes, when Arturo Garza swung a 25-yard free kick around the wall and into the top corner. The temptation in these moments is always to look at the wall and the keeper, but sometimes the shot is just too good.

The visitors were more composed on the ball, and more organised across the field, and it was only a matter of time before they found the equaliser. Home keeper Eduardo Sandoval did not look at home in the keeper’s jersey all day, and one can only hope that it was simply the vagaries of the US Open Cup scheduling that led him to be standing between the posts. His lack of confidence was finally exposed on the half hour mark as Tim Willis picked his pocket and scored the easiest goal of his career.

Five minutes later Stegman’s took the lead, as their perseverance with long diagonal balls paid off, allowing Olsen to lash home past the hapless Sandoval.

Stegman’s deserved their halftime lead, but Aurora came out for the second half with increased vigor. In the 50th minute, Ryan Salazaar pulled the ball down on the edge of the area, and ripped one past Matt Elder in the visitor’s goal.

The second half was a more even affair than the first, with the wet and windy conditions not really helping the game as a spectacle. Both sides traded blows, but clear cut chances were few and far between.

Extra time offered more of the same. Both teams were understandably exhausted, and tricky play gave way to hopeful punts downfield. Lacking anyone to hold the ball up on either side, it was always likely to be a set play that decided this. And so it was that Stegman’s stand-out player, Martin Brown, curled in a corner in the 100th minute, which was met with interest by left back Nick Hutton, leaving Sandoval grasping at thin air.

Aurora tried to battle back, but lacked any clinical incision. The stuffing was knocked out of them, and after 120 minutes, Stegman’s deserved the win.

With the win, Stegman’s moves on to the final round of qualifying where they will have to hit the road again. This time, they have a much longer trip to Western New York ahead of them to take on the Rochester River Dogz. Even though the US Soccer Federation now offers some financial assistance to teams so they can cover travel costs, with back-to-back road games Stegman’s still needs help. The club has launched a fundraising campaign to help pay for their travel to Rochester.