2016 Meet the Underdogs: Harpo’s FC coach confident ahead of US Open Cup run, “we could win the USL”

Started in 1997 as a way for University of Colorado players and their friends to get more games, Harpo’s Tavern sponsored a soccer team and started the local legend.

Johnny Freeston was part of the old crew and is now the owner and the man behind Harpo’s FC and their focus on winning at higher and higher levels.

“Last year we weren’t ready for the US Open Cup,” Freeston said. “This year it is our number one priority.”

Last season, Harpo’s had an attention-grabbing run, defeating amateur side KC Athletics at home and the PDL’s BYU Cougars away before ultimately falling away at the USL’s Colorado Springs Switchbacks.

The Colorado Rapids have been accommodating hosts for Harpo’s FC and other regional amateur rivals during their Open Cup run and qualifying matches, offering the practice fields at Dicks Sporting Goods Park as a consistent home base.

Grateful but ambitious, Harpo’s FC have set a goal for this year’s Cup run: to play on the Dick’s Sporting Goods Field pitch, inside the stadium – where the Rapids play their MLS home matches – against the highest competition the region has to offer, the Rapids themselves.

This run would require the fearless group to win two games on the road: at Albuquerque Sol (PDL) and at Colorado Springs Switchbacks (USL) in the month of May before being matched up with a NASL side or another side that has advanced this far. A win in this third round game would make a matchup of an amateur team vs. a top-division MLS team. Only five amateur clubs have knocked off an MLS team; Cal FC (2012), Michigan Bucks (2012, 2000), Dallas Roma (2006) and Chicago Shockers (2000) but Harpo’s owner Freeston repeatedly states that forcing this matchup is this year’s goal. 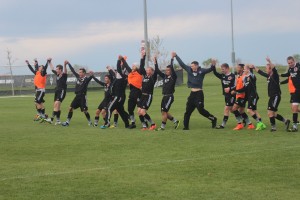 There is no lack of confidence in this group. Head coach Steve Lepper, who grew up in Switzerland and came to the United States where he played soccer at Hope College (Division 3 school in Michigan) and played in the PDL for the now-defunct West Michigan Edge. He has coached at various clubs here in the States, and was the executive director at St. Vrain FC youth club in Longmont, Colo. for eight years and the Colorado Rapids U-23s. With his experience, Lapper is highly confident in the skills of the Harpo’s side.

“We think we could win the USL right now with the players we have,” says coach Lepper.

And Harpo’s does have an experienced and cohesive squad.

“We might be a pub team, [and] we can’t train every day because of work and family, but on any given day we can hang with anyone,” said Freeston. “I desperately want to move up, I think all of our guys want to move up, our fans want us to move up and challenge ourselves at the highest level.”

The system that Lepper and Freeston have put together is a mixture of youth and experience, continuity mixed with constant competition. Lepper and Freeston have the ability to call upon 50-60 players at any given time, since they are not a professional team everyone has a job and a home life, but from that group the best 18 will suit up on match day.

This year’s squad returns almost all of their 2015 Open Cup starters including center forward Shane Wheeler, speedy frontman Dan Whittle, acrobatic goalkeeper Zac Gibbens, the team’s leading scorer/former Finnish pro Kyle Luetkehans, and offensive-minded wingback Sawyer Frank. Notable additions who will feature in this year’s Open Cup opener include Michael Ogletree, a veteran of MLS’ now-defunct Chivas USA, captain Dan Campbell, a D1 college player who has turned into one of the core players for both the outdoor side as well as the outstanding indoor side, as well as former USL Charlotte Eagles super-sub Chris Salvaggione.

2016 has begun in similar fashion to the previous year with Harpo’s FC dominating indoor Premier Arena Soccer League (PASL) play up until the final. Once again Harpo’s FC fell just short in the PASL final thriller to a Texas based club, this year it was RGV Devils in penalty kicks. The outdoor Colorado Amateur Soccer League (USSSA) Spring Season has recently kicked off and Harpo’s FC is in fine form, currently 3-0 with 12 goals scored and zero allowed in games vs. Union Jerez, Real Colorado and FC Denver United.

Last year, Harpo’s had to dethrone two-time defending USSSA champion Colorado Rovers to qualify for the Open Cup. This year, those two teams met again in the 2016 qualifying tournament. This year, Harpo’s did it again, by knocking off the Rovers 4-1 in the opening round. Harpo’s forward Daniel Whittle scored the opener before former MLS player Ritchie Kotschau equalized in the second half. The two Colorado Amateur Soccer League (CASL) rivals went into to overtime tied at one a piece. After 100 minutes of physical, back and forth soccer the rowdy Harpo’s support pushed the Boulder-based pub team past the exhausted Rovers with three knockout goals from captain Dan Campbell and well-traveled forward Chris Salvaggione to win 4-1.

In the next round, a 3-1 win over the Colorado Rush at Dick’s Sporting Goods Park Field No. 8 would prove to be the game that clinched a spot in the tournament. Last year’s TheCup.us Player of the Round from the Preliminary Round, Kyle Luetkehans, scored the opener, followed by Dan Campbell before halftime and Sawyer Frank adding the insurance goal in the 81st minute.

Wednesday, May 11, when Harpo’s FC takes the field in Albuquerque, they will not be the unknown quantity they were last season, but with their depth and continued form, the coaches and players expect this to be their best year yet. Their dreams are big, but they have the plan to take it one step at a time, and one of the most important steps is: might as well have fun while you are doing it, because you never know when another upstart #bullshitpubteam (the hashtag they started) might come out of nowhere and take it all away.

Watch a promotional video of Harpo’s FC below