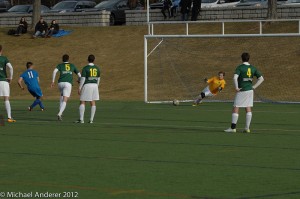 The Pancyprian Freedoms scored the only goal of the game against Newtown SC from the penalty spot in the 83rd minute. Photo: Michael Anderer | SoccerLImagazine.com

The New York Pancyprian Freedoms have gone from being one win away from qualifying for the 100th edition of the US Open Cup, to being on the outside looking in. And now, as a result of an appeal to the United States Adult Soccer Association’s National Cups Committee, they are back in the hunt for the tournament again.

The three-time US Open Cup champions were disqualified from the USASA Region I Open Cup qualifying tournament after it was discovered that they used an ineligible player in their 1-0 quarterfinal victory over Newtown SC on April 7.

According to the Cosmopolitan Soccer League’s official website, New York player Andreas Chronis was sent off in a league game on Dec. 9 against Hoboken FC 1912 for “rough play … insulting a referee with [a] racist remark, [and] also trying to assault a referee with [a] headbutt.” Chronis was suspended until August 31, 2013 as a result of his actions.

According to George Halkidis, general manager of the Freedoms, the CSL website’s description is wrong and Chronis attempted to headbutt an opposing player, and not the referee. Regardless, the overall offenses, most of all the verbal abuse he inflicted upon the match official during and after the game, were seen as a serious offense, and thus making him ineligible for league and cup play.

Serious offenses, such as assaulting match officials, is a ban that stretches federation-wide, therefore, since the incident occurred during league play, it would carry over into cup competitions, such as the Open Cup. The bottom line is that Chronis was not eligible to participate in the April 7 game against Newtown SC.

Had the newly-renamed Newtown Pride SC not discovered the suspension listed on the CSL website, no one would have noticed the error. The Freedoms GM, like all teams do, submitted his roster to his league prior to the match and it was cleared, which is the main reason why Halkidis’ team has been given a lifeline.

According to a letter obtained by TheCup.us, “The [National Cups] Committee has further considered the circumstances surrounding the fact that the NY Pancyprian Freedoms were advised by their League that the Player Andreas Chronis, was eligible to play in the National Cups. We believe that the League made a serious error in issuing this advice, and the NY Pancyprian Freedoms acted on that wrong advice.”

With that ruling, the decision to disqualify the Freedoms was overturned and a replay of the original game was ordered. The game will take place on Sunday, April 21 at Newtown High School in Newtown, Conn at 3 p.m. Eastern Time. And at the risk of being obvious, Chronis is not allowed to take part in the contest.

“I feel good that we were cleared of any inappropriate discretion,” said Halkidis. “We are a historic club that take the National Cup competition very seriously. We have proudly represented our club and community on our way to a record six US Open Cup titles [three of them USASA Open Cup titles], always competing under the FairPlay spirit.”

The winner of the match will face Massachusetts champion Mass Premier Soccer with a spot in the 2013 US Open Cup on the line. The date of that match is still yet to be determined as well.