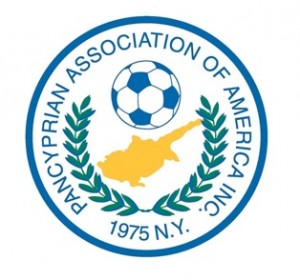 Last year, the New York Greek American Atlas defeated their rival the New York Pancyprian Freedoms in the Eastern NY Open Cup Final. The 4-0 victory denied the Freedoms a fifth straight state title, but on Wednesday night, they got their revenge, winning a penalty kick shootout after the teams finished regulation and extra time tied at 2-2. It was their sixth state championship in the last eight years.

With the win, the Freedoms advance to the USASA Region I Finals which will take place in the spring. There they will attempt to qualify for the Lamar Hunt US Open Cup for the fourth time in the last six years.

It was a cold night at St. John’s University’s Belson Stadium as the two New York powerhouses found themselves squaring off in a cup final once again. For the Freedoms, they had to win three games to reach the championship game. The Greek Americans, on the other hand, earned themselves a bye into the final by winning the Sal Rapaglia Cup, a Cup Winners Cup-style competition that they were a part of as defending Cosmopolitan Soccer League champions. The Greeks defeated the Freedoms 2-0 on their way to winning the tournament back in September. They defeated Long Island’s Forest Park in the title game.

It didn’t take long for the game to warm up as the Freedoms struck first in the opening minutes. John Koutsounadis sent a through ball to veteran Stefan Dimitrov, who finished to give him at least one goal in every game in this year’s tournament.

Leo Fernandes leveled the match with an impressive individual effort around the 40th minute. Fernandes, a star for Stony Brook University, stole the ball from Jeff Matteo in midfield, went on the attack, dribbled through a couple of defenders and beat the keeper to make the game 1-1 heading into halftime.

The Freedoms would regain the lead in the 74th minute when Dimitrov turned provider, setting up another veteran Julio Cesar Dos Santos for a goal. Just like Dimitrov, Dos Santos, one of the greatest pro players to ever play in the United Soccer Leagues (115 career goals), has scored in all three of the team’s Open Cup qualifiers .

Minutes away from taking the Eastern NY trophy back from the Greeks, the Freedoms had their celebration spoiled when the Greeks tied the game up on a goal by former New York Red Bulls forward Chris Megaloudis, on an assist by Shaun Foster, in the 88th minute.

The match would have to be decided by a penalty kick shootout, which favored the Freedoms and their outstanding goalkeeper Chad Calderone. The veteran shot stopper came through, saving the Greeks’ first attempt by Tom Wharf, and what would prove to be their fourth and final attempt by Leo Fernandes. The Freedoms went 4-for-4 on their attempts to clinch a spot in the 2013 USASA Region I Finals.