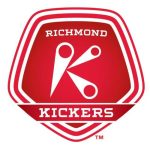 They may not be saying, “Oh no, we have to play Richmond,” but D.C. United will know to be wary, and prepared, for a Kickers squad experienced at taking down Major League Soccer teams in the U.S. Open Cup.

United travels to Richmond next Tuesday for a Third Round match to face a Kickers squad that is similar to the one that in last year’s U.S. Open Cup took down the MLS’s Columbus Crew and Sporting Kansas City on the road, before falling 2-1 at Toyota Park against the Chicago Fire in the semifinals.

The Kickers advanced to host United by virtue of a convincing 4-0 win over Dulles Sportsplex Aegean Hawks FC of the U.S. Adult Soccer Association at the Maryland Soccerplex. The Kickers received two goals from Christopher Agorsor, as well as single goals from Gerson dos Santos and Nozomi Hiroyama to lock down the Hawks.

Agorsor opened the scoring in the 20th minute, as defender Henry Kalungi played a long ball from midfield toward forward Jason Yeisley, who flicked the ball into Agorsor’s path. The former University of Virginia standout made a quick turn and fired low into the left corner for the 1-0 lead.

The Kickers struck again before the half, this one coming off a Mike Callahan corner in the 28th minute. Callahan played the ball to defender Luke Vercollone, who took a touch and then hit an outswinging ball in the box to dos Santos, whose header went into the upper 90.

The Hawks had two quality chances before the half, but just missed. The Kickers then used the second half to seal the match, getting two more goals late.

In the 82nd minute, dos Santos put a free kick from 20 yards off of Agorsor’s heel and into the net at the near post to put the Kickers up 3-0. Two minutes later, Hiroyama took a pass from Bobby Foglesong near midfield and dribbled 45 yards through the Hawks defense before scoring from 14 yards.

The last time United played the Kickers in the U.S. Open Cup was in 2010, when United won 2-0 in a round of 16 game at George Mason University (highlights below).

In 2004, the Kickers defeated United in the Open Cup 2-1 in the third round before falling to the Chicago Fire.

In their history, besides winning the U.S. Open Cup in 1995, the Kickers have taken down the following MLS teams at various points–Colorado Rapids, Sporting Kansas City, Columbus Crew, D.C. United, L.A. Galaxy.

The Kickers return to regular season action May 26 when they host the Wilmington Hammerheads, who fell 4-0 to Eric Wynalda’s Cal FC.