Third-tier side Flower City Union of the NISA held MLS’ D.C. United for much of the Third Round match in the U.S. Open Cup, but a 73rd-minute goal by forward Ola Kamara opened up the floodgates as the top-tier squad advanced to the next round of the domestic cup competition with a 3-0 win in Rochester, NY.

“The only goal tonight was to win, to go to the next round,” said D.C. United head coach Hernan Losada. “And at the same time, give a lot of minutes and opportunities to players who didn’t play much the last couple of weeks. So both goals were achieved.

“That’s the only thing that matters tonight. We go back to DC without injuries. Players can get match rhythm and we went through to the next stage.”

The emphatic 3-0 score sends three-time Cup winners D.C. into the Fourth Round while Flower City’s first experience in the Open Cup ends after two matches.

“We knew they would have more possession, it’s pretty typical for this type of matchup. We still wanted to go in and play our style, play forward when we can,” said Flower City Union head coach Zach Agliata.

“For the first half, I thought we played with them, up until 70-75 minutes in. I couldn’t be more proud of the guys. They battled for it and I told them they would have to. They rose to the occasion. When you get a big club coming in, the guys raise their standards.” 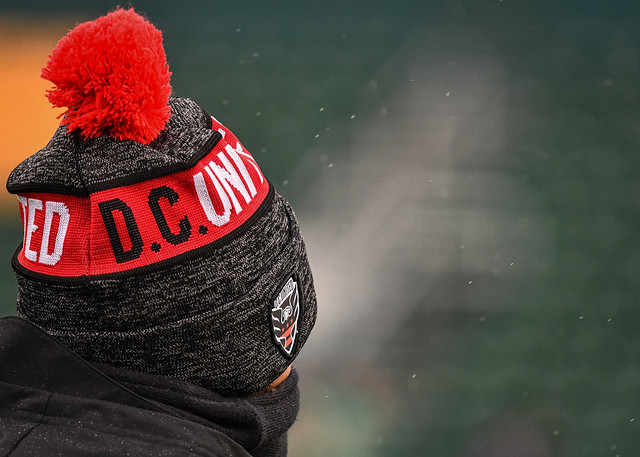 Both D.C. United and Flower City Union have struggled in their respective leagues and were looking for a strong performances in the Cup to jump-start its seasons.

Flower City Union has not won a match in three attempts so far in the third-tier NISA, with just a slender Open Cup win over Western Mass Pioneers in the last round as the team’s only success of the campaign. In similarly dire straits heading into Tuesday’s match, D.C. United has lost four straight MLS games after starting the season with two consecutive wins.

“It’s just that these kind of games are never easy,” Losada said. “I’ve been in a lot of those games where you might believe it’s going to be an easy game just because of the level of the opponent but when you play against a good structure, a good organization with 11 players on their own half, the most difficult thing is the first goal.”

The stand-out performer for the home team was goalkeeper Maykell Ortega. He produced a kick save on Michael Estrada from point-blank range in the 12th minute and had the wherewithal to pressure Edson Flores into sending his shot over the bar.

Estrada had another chance for D.C. in the 22nd minute after Ted Ku-DiPietro played a slicing diagonal pass into the area. As Ortega came off his line, Estrada attempted to place his shot back the way his pass came but missed wide of the post.

In the 33rd minute, Griffin Yow received a long ball over the top from midfield and gently guided the ball into the back of the net but the referee had already whistled for offside.

As the visitors piled on pressure with possession in the attacking half, they left themselves vulnerable to potential counter attacks. Flower City tried to feed Jay Lee several times as the first half wound down but the lone striker was called offside in the 37th, 39th and 40th minutes.

Ku-DiPietro did well to beat Flower City’s Lukas Fernandes and Auston Kranick in the right channel before cutting inside to take a shot. The home side’s 24-year-old goalkeeper smothered the attempt in the 43rd minute.

Flower City had a meaningful goal-scoring opportunity just before the half-time whistle. Right-back Benjamin Watson hit a long ball upfield that Lee controlled in the channel before cutting in on Tony Alfaro and unleashing a shot from a tight angle. D.C. goalkeeper Jon Kempin blocked the shot but gave up a rebound that agonized through the goal mouth with no attacking players pushed forward to crash the loose ball.

The second half carried on with D.C. controlling the run of play and Flower City looking for chances on the break. One such chance came on a rare venture forward from midfielder Jordan Saling who battled several visiting players to maintain possession before dishing the ball out wide to an overlapping Watson. With multiple targets to aim for, the full-back’s 66th minute cross was too close to Kempin.

A few more details on @TheAthleticSCCR, unlocked for all to read: https://t.co/TKJwzBVrOD

Second-half substitute Nigel Robertha was active in the Flower City penalty area, including the play prior to the break-through goal. The Dutch forward drew defenders to him before dropping the ball to Kamara, whose shot rang off the frame of the goal. Flower City’s defense half-cleared the rebound before substitute Tyler Freeman and Drew Skundrich combined to move the ball wide to Ku-DiPietro. The 20-year-old midfielder sent a cross into the box from the right wing and Ortega bobbled the ball at his near post, allowing Kamara to crash the net and head in the game’ first goal in the 73rd minute.

In the 81st minute, Robertha doubled D.C.’s lead with a simple finish from close range. Yow did well to knock down an attempted clearance and play a pass forward to Kamara, whose square ball eluded several Flower City defenders. Robertha received his pass, took a touch outside with his right foot to create separation from center back Andriy Demydiv, and coolly slotted his shot past an on-rushing Ortega.

Despite his first-half heroics, Ortega earned a yellow card in the 85th minute for making contact with Kamara after the Norwegian forward dribbled past him. Kamara dispatched the ensuing penalty for his second goal of the night the following minute.

Agliata was full of praise for his goalkeeper and noted the work that Ortega has put in since joining the team.

“He was just incredible. We’ve got a fantastic goalkeeper coach and Maykell has picked up a lot. He came up big in this match,” he said. “I just feel bad for him that the ones that got past him, did get past him. He played really well.

“I just feel really proud of all the boys. I told them they would have to fight and they rose to it and they did fight. They earned this type of feeling, this moment. They’re all positive, which is good. They’re looking forward to Maryland .”