Daniel Ankrah’s presence on both sides of the ball proved to be the difference maker in a frigid, snowy game Sunday at Roberts Wesleyan College.

Ankrah, who scored in the last minute of both the first and second half, championed a win for World Class Premier Elite FC over the Rochester Lancers 2, 3-1, in the Third Round of the Open Division Local qualifying tournament for the 2019 Lamar Hunt US Open Cup qualifying.

“He was phenomenal,” World Class Premier head coach Kokou Assigbe said. “We knew we needed him today to step up.”

Elton Joe opened the scoring early for WCP, notching a goal in the first ten minutes. After receiving a through ball over the top of the Lancer defense, he cut across the left side of the 18-yard box and slipped the ball underneath the legs of Rochester goalkeeper William Banaheme. Joe continued his impressive play which included a hat trick and two assists in the club’s 6-0 win over Cville Alliance FC Reserves in the previous round.

It took the rest of the first half before Ankrah found the back of the net, who slotted a shot in against the far post after handling a cross from the top of the 18-yard box.

“He’s one of our key players. He played to the game plan, and an opportunity was provided for him to get the chances that he got and he took them” Assigbe said. “That was the mindset, if the chances come he needs to take them and he took them just when we needed it.” 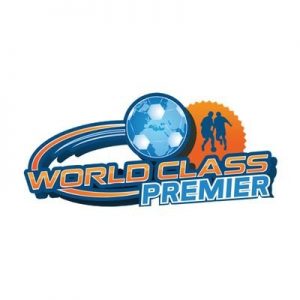 Ankrah lended a helping hand on the defensive side of the ball as well. Samuel Wasson presented one of the Lancer’s best chances to equalize midway through the first half, only to have his shot turned aside by Ankrah.

Back-to-back corner kicks followed for Rochester, who protested for a handball call during the clearance of the second kick.

Jared Toth managed to hit a shot which eluded WCP goalkeeper Evan Raimist only for the ball to bounce back into play off the intersection of the post and crossbar.

Rochester’s Issac Kissi fired a shot which got blocked by a defender as well. Kissi led the Lancer’s up top, who probed the Premier defense with multiple dangerous crosses during the opening half before Ankrah’s first goal.

“They got some good chances in the first half especially crossing the ball across,” said Assigbe. “We knew that was gonna be a little bit of trouble coming into the second half.”

Raimist rose to the occasion for WCP in the second half. He protected the middle of the box and turned away the Lancers’ chances, including a deflected shot from Peter Dilorenzo and Kissi which he punched over the bar.

“If he did not make that save, I don’t think the game would have ended the way it did,” Assigbe said. “It was early on, there was a lot of time left on the clock. Him making that save was crucial for us. That kept us in the game.”

World Class Premier’s possession-based style deterred Rochester’s offense in the second half, limiting them from mounting a complete comeback.

“We just knew that we had to keep playing the game,” Assigbe said. “Keep possession of the ball. Not give the ball away, not give them any chances. I think we did that for the majority of the second half.”

Rochester battled to stay in the match regardless. Crosses by Juan Pablo Reyes and Jake Schindler resulted in mere opportunities. Kissi dazzled the crowd with an acrobatic bicycle kick that cleared the crossbar, before Rozzano finally tallied for the Lancers off a volley about 35 minutes into the final half.

The late surge proved fruitless however, as WCP held strong. Ankrah gained open space on a late counterattack, placing the ball in the back of the net and watching as it dribbled in to seal the match away.

With the win, World Class Premier advances to the Fourth Round of the qualifying tournament but it is unclear, as of now, whether a Fourth Round, which is tentatively scheduled for March of 2019, will take place. Every professional team in the United States is automatically entered into the US Open Cup, and with the addition of an entirely new professional league with USL League One (Div. 3), and a number of expansion teams in the USL Championship (Div. 2), the format of next year’s tournament has yet to be finalized. Without a finalized format, it’s unclear how many Open Division teams (National Premier Soccer League, USL League Two — formerly Premier Development League — , and all of the Open Division Local teams) will be granted entry into the competition. It’s possible that the WCP will have to play a Fourth Round qualifying match, but they won’t find out until January.