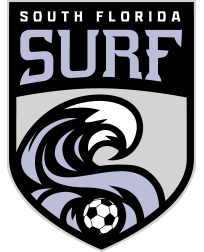 There was plenty of offense to be had as two of South Florida’s best amateur clubs kicked off the 2017 Lamar Hunt US Open Cup. The South Florida Surf took a lead early and in the second half, and wrapped up a 4-2 victory over Red Force FC.

South Florida scored quickly with former Fort Lauderdale Strikers player Manny Gonzalez hitting the lower 90 on a free kick in the 10th minute. Gonzalez took the free kick from just outside the penalty area to the left of the goal. He bent the ball through the wall, past the keeper and into the back of the net to give the visitors an early 1-0 lead.

The Surf missed several opportunities to add insurance in the first half, and the Red Force took advantage. In the 40th minute, Andres Ruiz received the ball on the right side of the field in the Surf’s attacking third. He cut back inside and took a shot from distance and after deflecting off a defender’s leg, the ball got past the goalkeeper to tie the score heading into halftime.

The Surf regained the lead when a pair of former Tampa Bay Rowdies players linked up. Darwin Espinal reached the end line and played the ball into the middle where Jeff Michaud took advantage of the space and beat the keeper.

The Surf would strike again with Espinal feeding a through ball into the box for Gabriel Machado, who beat his defender and found a wide open Brad Farias in front of the goal. Farias tapped it home to make it 3-1 for the visitors.

Four minutes later the Surf would put the game away after an impressive run of possession. Some crisp passing up the field led to Luiz Soupinski crossing the ball to Michaud at the top of the ‘D’. Michaud brought the ball down with his right foot, over to his left foot and volleyed it past the keeper in what was the most impressive goal of the night.

Stiven Salinas would add a late goal in the 84th minute, but the Red Force would get no closer as the Surf would advance 4-2.

With the win, the Surf were victorious in their US Open Cup debut and earn themselves a Second Round date with the NASL’s Miami FC next week.