2017 US Open Cup format unveiled with record number of teams 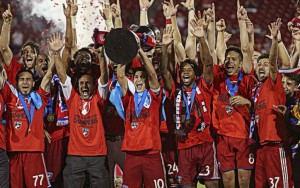 The United States Soccer Federation announced the format for the 2017 Lamar Hunt US Open Cup with a Modern Era (1995-present) record 99 teams set to take part in the 104th edition of the tournament.

Just like last year, the third round of the Open Division qualifying tournament has been canceled and all the remaining teams, with the exception of Minneapolis City SC who has been disqualified, will enter the tournament which is scheduled to begin May 10. The opening round will feature a Modern Era record 56 amateur clubs. 17 Open Division teams will join 21 Premier Development League (PDL) teams and 18 National Premier Soccer League (NPSL) clubs.

The format will look a little different this year due to the changes at the professional level. For the first time since 1995, the first year of the Modern Era, there will not be three professional divisions represented in the tournament. The United Soccer League (USL) and the North American Soccer League (NASL) were both awarded provisional Division II status, and will all enter the competition in the Second Round, scheduled to take place on May 17. The USL will feature 18 teams, while the NASL is submitting six.

The Round 2 winners will play each other in Round 3 on May 31 and the teams that emerge from that will welcome the 19 US-based Major League Soccer teams in the Fourth Round on June 14.

The winner of the 104th edition of US Soccer’s national championship, will take home a $250,000 cash prize and a berth in the 2019 CONCACAF Champions League. The runner-up receives $60,000, while the Division II club and the amateur club that advance the furthest will be awarded a $15,000 prize.

There are some teams that did enough to qualify for the 2017 tournament but have been left out due to changing leagues. The chief example is Minneapolis City SC, a team that’s decision to change leagues ultimately disqualified them from the tournament. City changed from the Premier League of America to the National Premier Soccer League while the qualifying tournament was ongoing and according to the US Open Cup rules, that disqualifies them.

Two other teams, the Myrtle Beach Mutiny and the Midland-Odessa Sockers, had good enough league seasons to qualify for the NPSL and the PDL, respectively, but since those teams joined the rival league, they were left out. The New York Cosmos B, who are a professional team within the NPSL and owned by the NASL club of the same name, are not eligible due to rules forbidding pro teams owned by higher-level pro teams entering the same tournament.

First Round pairing and be scheduled to play its winner. The remaining First Round matchups not paired with a Division II side will be paired geographically, with the winners playing each other to complete the round.

* Any game in the Fourth Round, Round of 16 and Semifinal Round where one of the participants has a league game the following Friday will be moved up a day (exception to this is when the team’s opponent is scheduled for a league game the preceding Sunday; in this case, the provisions in the 2017 Lamar Hunt US Open Cup Handbook to determine the match date will prevail). In addition, any game chosen by US Soccer to be broadcast nationally is subject to being moved up a day.

^ For the Quarterfinal Round, teams may apply to change the match date within a window that runs between July 7-16 if both teams in a match are not scheduled otherwise.

Note: The day following each of the dates listed above is reserved as a make-up date in the event of a weather postponement.

Division I and II Professional Teams Eligible to Participate (43 total):

Open Division Teams (56 total, all entering in the First Round):

The PDL is a nationwide league affiliated with the U.S. Adult Soccer Association and opted to use 2016 league results to determine its qualifiers for the 2017 Open Cup.

The NPSL is a nationwide league affiliated with the U.S. Adult Soccer Association and opted to use 2016 league results to determine its qualifiers for the 2017 Open Cup.