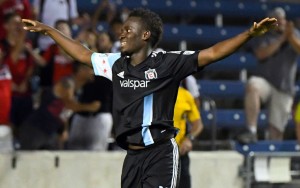 David Accam of the Chicago Fire celebrates his goal against Indy Eleven in the 2016 US Open Cup. Photo: Chicago Fire

The Chicago Fire rallied late in extra time and narrowly edged Indy Eleven 4-3 in penalty kicks Wednesday at Toyota Park to advance to the Round of 16 in the 2016 Lamar Hunt US Open Cup.

The NASL Spring Champions gave the Fire all they could handle, taking a 1-0 lead in the 105th minute and threatening to become only the third team in Open Cup history to eliminate the Fire in a game played in their home state.

Forward Justin Braun, who had accounted for Indy Eleven’s two best scoring chances on the night, put his team on the board when he received the ball at the top of the box and executed a textbook turn and shoot to beat a diving Matt Lampson to his left side.

Indy appeared on the verge of victory before Chicago Fire forward David Accam, who had been plagued by missed opportunities all evening, leveled the score in the 111th minute. The speedy Ghanaian took matters into his own hands with a run down the right side of the box. One shot fake sent two Indy defenders sliding out of position and a quick cut back inside was all the space he needed to finish his chance in the top corner.

The game entered penalty kicks where Indy Eleven once again took an early advantage courtesy of a Nicki Paterson goal and a miss by Fire forward Kennedy Igboananike. The teams both converted their second attempts but the Fire drew level after Nemanja Vukovic was denied by Lampson in the third round and Fire left back Brandon Vincent converted. The score was level at three when Accam struck once again to give Chicago the 4-3 victory in penalty kicks.

Leading up to extra time, it it was Chicago that missed opportunity after opportunity, keeping the window open for a dangerous Indy Eleven side to capitalize.

Paterson got the scoring chances started for Indy Eleven in the 14th minute with a lofted shot from about 20 yards out. Lampson, scrambling backwards, parried the ball up and away from the net.

Chicago started to turn up the heat in the 20th minute when midfielder Khaly Thiam just missed the far post. It was followed up two minutes later when Thiam found Accam on the break and Accam sent his point blank shot off the woodwork.

Thiam and Accam would continue to connect, with Thiam missing a header off an Accam free kick in the 29th minute and putting a shot on goal in the 38th and Accam forcing a save in the 39th.

But as the half closed down, Braun nearly opened the scoring with a shot from the left side of the box that barely missed the back post. He then found midfielder Dylan Mares on a break but it was broken up by Fire defender Jonathan Campbell.

Indy Eleven regained control in the second half as coach Tim Hankinson seemed to hit all the right buttons with his substitutions. After Braun forced another difficult save from Lampson, Hankinson brought in Souleymane Youla for Mares. The substitute forward had an immediate influence on the game, putting a shot off goal in the 71st minute but involved in threatening buildups throughout.

The Fire had some chances including from substitute Nick LaBrocca who missed an open net in the 84th minute, from midfielder Razvan Cocis who was robbed with a kick save by Indy Eleven goalkeeper Jon Busch and from Igboananike who missed a point-blank open net after Busch gave up a rebound in the six-yard box.

Unlike the Fire’s missed opportunities, Hankinson’s second substitute, Sinisa Ubiparipovic, made the most of his. The former Red Bull made a brilliant pass to Braun to assist on the goal in the 105th minute.

While it wasn’t the perfect performance, Fire coach Veljko Paunovic said it was a hard-fought win after a two-week layoff.