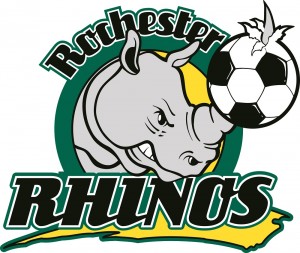 UPDATE: After the Fourth Round matches were complete, the Rochester Rhinos emerged as the last remaining USL PRO club in the Fifth Round, therefore are to be awarded the $15,000 prize as the Third Division team that has advanced the furthest in the tournament.

Tuesday night was a match between two former champions of the US Open Cup. DC United defeated the Rochester Rhinos to win the tournament in 1996, and then lifted the trophy again in 2008 and 2013. Rochester made a name for themselves in 1999 as the only lower division team to win the tournament since MLS joined the competition in 1996. In a game marked by poor weather, including more than two hours of delays, the Rhinos held on for a 1-0 win, their first over the defending champions in four tries.

A club that has lifted this trophy three times, United bows out as defending champions. Despite having a break in league action during the World Cup, manager Ben Olsen opted to use the match to evaluate younger players.

Rochester started as strong a lineup as head coach Bob Lilley could afford. Star forward JC Banks had tweaked his knee during training this past week and was only an option off the bench. Lilley overlooked regular left back Onua Obasi fora more defensive minded fullback option in Patrick Slogic.

“Although it wasn’t their top lineup, it was still a good team,” Lilley said. “We had to play well. I thought we battled and with the travel it was going to be a tough game no matter who we played against tonight. After a disappointing loss the guys rebounded and I thought it showed a lot of heart.”

Most of the opening half hour of the game was evenly matched between the two teams. DC attacked through the middle while Rochester tried to use its pace down the wings but neither goalkeeper was tested in the first 26 minutes.

Tony Walls, playing as the anchorman in Rochester’s midfield, received a drop pass from the right side and played a switch to Michael Garzi on the other wing. Garzi confidently beat Alex Caskey and Jalen Robinson inside the area before cutting a low ball in towards Colin Rolfe at the near post. The former Houston Dynamo forward outpaced centerbacks Nana Attakora and Steve Birnbaum to reach the corner of the 6-yard box. Rolfe redirected Garzi’s pass towards the far post and past a helpless Andrew Dykstra in the 27th minute.

After conceding the goal, DC used it’s 5-man midfield to crowd Rochester out of the center of the field. As the first half closed out, and the rain began to pour down, the visitors set up a perimeter around the Rhinos’ half of the field and attempted to build out of the back.

United’s best chance of the first half came from a low cross down the right side. The 20-year-old fullback Robinson stormed down the wing and sent in a ball that forward Conor Doyle met at the near post. The former Derby County forward did well to get on the end of the cross but sent his shot wide of McCarthy’s goal.

The start of the second half was much of the same back and forth play. The match was physical from the first whistle but the center referee, Robert Sibiga, decided to let the teams sort it out themselves.

Steve Birnbaum earned the first booking of the match in the 50th minute for dragging down Mendoza with two hands after the speedy midfielder beat him up the right wing. The second overall pick in the 2014 MLS SuperDraft received his second yellow card 10 minutes later.

Off a punted clearance from John McCarthy, Rolfe and Birnbaum set themselves for an aerial challenge. Instead of dropping by them, the ball got caught in the wind and skidded farther down field. Rolfe had the step on Birnbaum and the centerback pulled him back for a second booking and subsequent dismissal.

In the 61st minute, just seconds after sending off Birnbaum, Sibiga brought the game to a halt for a lightning delay that lasted 38 minutes. Both teams came out to warm up during the downpour while dodging significant puddles on the field.

After play resumed, DC brought on club captain Bobby Boswell to restore shape in the back line as Lewis Neal headed for the bench. Rochester also made a substitution, replacing Garzi with Lance Rozeboom.

While the game was briefly in progress, Rochester seemed the more likely to poke the ball home for a goal but the game was barely recognizable as soccer. The center referee did his best to ignore small lightning strikes despite calls about the dangerous weather conditions, but a large strike visible behind Rochester’s goal was unavoidable and the official whistled for another delay.

After the second delay, which lasted 91 minutes, Rochester shifted to a 5-man defense and brought on Onua Obasi to replace Patrick Slogic. Pushing for the equalizer, despite playing a man down, DC shifted its formation to play four forwards along Rochester’s backline; Porter, Seaton, Rolfe, Doyle.

Even centerback Boswell joined in the surging runs up the field and managed a dangerous looking shot in the 86th minute. Late-game substitute Chris Rolfe sent a free kick from a promising position, 26 yards out in the center of the field, well over Rochester’s goal. On the last play of the game Michael Seaton battled Diallo, Hoffer, and Walls in order to get his shot off but saw the ball roll harmlessly into the arms of McCarthy.

With the 1-0 victory, McCarthy made four saves to earn his first clean sheet of the competition (second of his career) to go along with his league-leading five shutouts in USL PRO. Rochester’s Colin Rolfe scored his second goal of the tournament after also scoring the game-winner in extra time against Reading United AC (PDL) in the Third Round.

“I think it was one of Colin Rolfe’s best games for us, regardless of the goal,” Lilley said. “He held a lot of balls and they had some physical centerbacks but he was able to hold his own up top, which was a good game for him and it was important for us to be able to get out of our end at times because Colin was able to hold onto the ball.”

With its first-ever victory over DC United, Rochester will travel to the winner of June 18’s match between the New England Revolution (MLS) and Richmond Kickers (USL PRO) for its Fifth Round matchup next week.