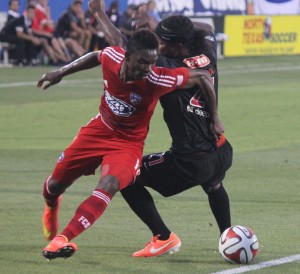 Tuesday night’s Fourth Round US Open Cup game in Frisco, Texas was the first ever meeting between NASL’s San Antonio Scorpions and MLS’s FC Dallas, but there was still plenty of hatred in the air. Thanks to a pair of second-half goals from Fabian Castillo and Andres Escobar, FC Dallas fans went home happy but the visiting Scorpions brought a busload of noisy supporters who helped create a lively atmosphere.

Unfortunately for the supporters, the game got off to a slow start with neither side creating many dangerous chances early on.

FC Dallas captain Blas Perez pulled a shot wide in the sixth minute while San Antonio midfielder Danny Barrera (formerly of Cal FC fame) managed to put a shot on frame that was saved by Dallas goalkeeper Chris Seitz three minutes later. Barrera was easily the most active player for the Scorpions as he put a shot on frame in the 17th minute and created several chances in transition for forward Eric Hassli, who played for FC Dallas in 2013. Fabian Castillo was the Dallas player giving San Antonio’s defense fits at the other end. He managed to earn Dallas several corners early in the first half, but none of them resulted in a decent chance for the home side.

The game picked up towards the end of the first half when Barrera had a shot from inside the box parried by Seitz, but Hassli botched the rebound to keep things scoreless in the 32nd minute. Scorpions midfielder Freddie Braun, who replaced defender Adrian Cann just before kickoff, had a shot of his own saved in the 37th minute. San Antonio’s star midfielder Walter Restrepo, who made NASL’s Best XI in 2012 with Fort Lauderdale Strikers, was shaken up right before halftime but ultimately stayed in the game. San Antonio finished the first half with a 4-1 advantage in shots on goal despite Dallas owning the majority of possession.

The second half started with Dallas bringing central midfielder Andrew Jacobson on for rookie forward Tesho Akindele. Both teams started to match the energy their fans brought and in the 53rd minute Dallas midfielder Andres Escobar looked to have been fouled hard, but the Hoops were ultimately awarded a corner kick, drawing the ire of the home fans. Escobar would go on to earn a yellow card in the 57th minute for a reckless challenge on Restrepo as the game began to get rougher. Hassli returned the favor earning a yellow of his own in the 69th minute for a reckless foul on Dallas defender Moises Hernandez.

With the intensity rising in the second half it was only a matter of time until one team broke through and in the 74th minute Castillo scored to put the home side up 1-0. The Dallas winger was played in behind the Scorpions defense by Andrew Jacobson and managed to score from a tight angle by finishing between the legs of San Antonio keeper Jeremy Vuolo. The goal was Castillo’s third straight in all competitions. Seven minutes later Escobar added a second, courtesy of second-half substitute David Texeira, and the 2-0 scoreline would ultimately hold up as Dallas won its initial US Open Cup match for the second year in a row.

Next up for Dallas is another “Texas Derby” as they will travel to Houston to take on their MLS rivals at BBVA Compass Stadium on June 24th or 25th. San Antonio, who hadn’t played a competitive game for 10 days and needed four second-half goals in the previous round just to defeat Dallas-based amateur side North Texas Rayados, will break for the summer now that their NASL Spring season is over.