As part of the ongoing MLS Jersey Week leading up to opening weekend of the league season, the Philadelphia Union today unveiled the new third jersey, a retro design created to honor the Philadelphia area’s most successful soccer club Bethlehem Steel.

The Bethlehem Steel are co-holders of the tournament’s all-time best championship tally having won the US Open Cup title on five occasions during their existence from 1911 to 1930. Four of the five championships came in the first six years of the event, winning it back-to-back twice (1915-16, 1918-19), and once more just four years before folding.

The new solid black jersey with white trimming has three elements tied to the Steel. In the wearer’s lower left front corner of the shirt is a large B made of felt, reminiscent of the material used during that era with the text ‘Bethlehem Steel FC 1911-1930’ beneath it. The team featured a large B on their jerseys throughout their existence.

Along the outside back collar of the shirt the Bethlehem Steel logo is featured with the years 1911 and 1930 on either side.

The final touch is another usage of felt, this time with the Philadelphia Union crest done in black and white.

“One of the great things that we found when we were coming up with ideas is all of this history of soccer that is on the east coast and in the Philadelphia area. And we found the Bethlehem Steel FC,” said adidas product manager Mike Walker via MLSsoccer. “They are a five-time US Open Cup winning team. They’ve got a lot of great history and we thought it was a perfect team to really kind of start with and talk about that history.

“That’s the foundation of soccer in the Philadelphia area that helped the Union kind of become what they are today.”

Beyond the jersey, the white B will also be featured in the black and red socks, the colors of the Bethlehem Steel logo, to complete the throwback uniform which is expected to run a two-year cycle.

While Walker may have been intrigued by the idea via his research, it was club CEO and operating partner Nick Sakiewicz that gave the green light and wholeheartedly endorsed the nod to a previous club who has more championships than years the 2010 founded Union have been in existence. 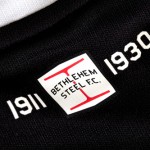 “Professional soccer has a dormant but rich history in the Greater Philadelphia region dating back over 100 years,” said Sakiewicz on PhiladelphiaUnion.com. “Our vision with this concept is to revive the history and recognize the past.

“As the Philadelphia Union now leads professional soccer into the 21st century it is our duty and responsibility to remember, honor and pay tribute to those teams that came before us and laid the groundwork for the growth of the game in the region.

The new shirt is already available for purchase along with other Bethlehem Steel style merchandise at the team store.