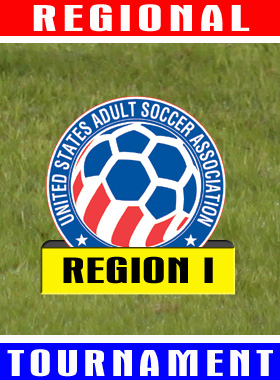 Despite a vast difference in the two clubs, it took four-time US Open Cup champion club New York Greek American Atlas 84 minutes before finding two late strikes to knock out upstart Boston-area club Battery Park Gunners Sunday in the opening round of the USASA Region I tournament.

The second half was characterized by waves of attack from the Greek Americans. Battery Park moved the ball through midfield capably but was unable to get an organized attack moving into the final third of the field.  New York dominated possession in the second half and earned the victory on a cold and blustery field.  Game time temperature was 44 and repeated wind gusts in excess of 30 miles per hour were present from the opening kick.  Greek American presented an organized attack, building through the back and getting more comfortable as the game wore on.

“Yeah, it was hard work, the Boston team are very hard working, very well organized,” said Greek American manager Michael Todd. “We had plenty of chances we didn’t put away, but we kept playing and eventually we got one of the chances and put it away so I’m very pleased.”

The conditions made the going tough for both teams, especially Battery Park, who appeared less comfortable moving the ball on the ground and whose long balls were continually ineffective in penetrating a solid New York defense.

“I thought we did well – the first half a little stronger – but lost our legs early in the second half,” said BPG’s Brian Griffith. “And (Greek American) clearly played well together tactically, where we weren’t as good moving the ball. We weren’t able to break through.

“It was fun to come and play, they’re a good side and I think we have a strong team to try to keep building on and hopefully be able to put it together a little more tactically and technically moving forward.”

For Battery Park, the 2012 entry into the USASA’s Open Cup qualification process was a trial balloon that showed some promise for a club that does not have a dedicated coach or experience playing against this type of competition.

“Yeah, we never even entered the Open Cup; this is our first time playing in it, and definitely it’s a learning experience,” added Griffith. “We want to play competitively, but in order to bring this to the next level we’d have to commit to practicing more, a little more organization. We don’t have a coach.  We don’t have a lot of the things of some of these other clubs that have the history.

“I think it’s a learning experience and something to build on, and certainly we know now the competition we are going to be playing against; and that’s why we’re doing it – you know. To see what’s out there, see how we stack up.  We’ve collected a good group of guys, have a lot of fun playing, and that’s our main focus – enjoy it and build from there, and hopefully get better results.”

Greek American certainly have the history, with four US Open Cups to their name – three from 1967-69 and a fourth in 1974.  The club, more recently, has won five of the last 11 Eastern NY championships, but hasn’t qualified for the Open Cup since 2005. That year, they were eliminated in the opening round by current manager Michael Todd and the Ocean City Barons (now Ocean City Nor’easters) of the PDL.

Looking to the future though, Greek American have their work cut out for them as a home date April 22nd with New Jersey champ Jersey Shore Boca is all that stands between Greek American and a berth in the first round of the US Open Cup.

“Every game at this level is going to be very hard, and were going to have to step it up in the next round I’m sure,” concluded Todd.

The loser of the April 22nd match will not be eliminated from Open Cup contention however, as the semifinal losers will get to play for the third and final US Open Cup qualifying spot out of the competitive USASA Region I field.  The other semifinal pits the DC/VA champion Aegean Hawks against Maryland champion Maryland Bays.