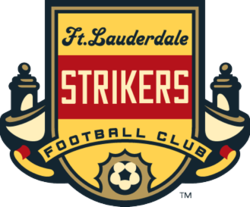 The Fort Lauderdale Strikers of the NASL narrowly escaped a reserve-filled DC United squad of Major League Soccer in a 4-3 penalty kick shootout. The game had to be decided from the penalty spot after 120 minutes of scoreless soccer at the Maryland SoccerPlex in Boyds, Maryland in the Fourth Round of the Lamar Hunt US Open Cup on Wednesday.

With a second straight draw (and second straight penalty kick shootout win), they made an unfortunate bit of history as well. Fort Lauderdale broke the Modern Era record for longest winless streak. The seven-game winless streak began when they lost to the San Jose Earthquakes (MLS) in the Third Round of the 2012 US Open Cup. They won a PK shootout with the Laredo Heat (PDL) in the opening game of the 2013 tournament, but then lost three straight games (2013 Round 3 vs. FC Dallas … 2014 Round 3 vs. Laredo Heat … 2015 Round 3 at Charleston Battery) before this year’s back-to-back PK wins.

Fort Lauderdale was able to overcome an incredibly slow first half start and upend the favored MLS squad to the Fifth Round.

Lead by goalkeeper Diego Restrepo who earned TheCup.us Player of the Round by saving three out of four penalties against the Richmond Kickers (USL) in the previous round, Fort Lauderdale was able to capitalize on DC United’s limited chances on goal and force extra time. United, who’s first shot came in the 53rd minute by 16-year-old home grown player, Chris Durkin, could not seem to find any rhythm offensively against the strikers.

DC head coach Ben Olsen played a young and primarily reserve squad throughout most of the match. Sean Franklin was the lone regular season starter and captain during the first half, before being substituted by Taylor Kemp. It wasn’t until the 85th minute when Luciano Acosta replaced Durkin that two regular season starters were on the pitch at the same time.

Fort Lauderdale fielded a primarily first-team squad, including Jean-Marc Alexandre, a Haitian international, who returned to the match after competing in the Copa America Centenario. Goalkeeper Diego Restrepo proved to be an asset for the second consecutive week in cup play making eight saves including a penalty to cap a “cupset” to the next round.

The Strikers are only one of two teams that do not compete in MLS to advance to the Fifth Round of the Cup.