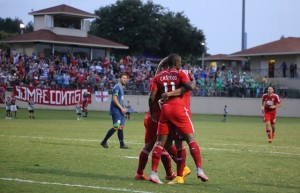 UPDATE: The Round of 16 draw was conducted by the US Soccer Federation and it was determined that Sporting Kansas City will host FC Dallas in the next round.

A wise man once said “Form is fallacy.”

OKC was riding a seven-game winning streak, five of which were clean sheets, while Dallas hadn’t won a league game since early May.

No one told Dallas’ Colombian playmaker Michael Barrios though. He scored twice in a span of three minutes in the first half to help Dallas defeat OKC 4-1 in a “home” game on the campus of Texas Christian University in Fort Worth.

“Obviously, it’s great to see the boys smile again and get a victory,” Pareja said.

The first half was an even affair through the first 10 minutes with both sides exchanging half-chances and Dallas holding a slight edge in possession. Then in the 20th minute, the floodgates opened for Dallas when Fabian Castillo weaved his way down the end line before cutting back to a wide open David Texeira for the opening goal.

Barrios scored twice before the break for FC Dallas to put the game out of reach.

Although Barrios stood out, OKC head coach Jimmy Nielsen was impressed with Barrios’ countryman Castillo, who was arguably the most dangerous player on the field in the first half.

“He was sharp. He was unstoppable,” Nielsen said.

Barrios scored his first goal in the 33rd minute off a rebound from a shot by Dallas midfielder Alex Zendejas. Barrios needed just three minutes to add his second to make it 3-0.

Dallas goalkeeper Chris Seitz gobbled up an OKC corner and then quickly got the ball up to Barrios, who turned on the jets and finished nicely at the other end just moments later.

Although it was probably little consolation to his team, Nielsen was pleased with the way his players came out for the second half with their heads held high against a quality MLS side.

“We played a respectable second half,” said Nielsen.

Indeed, OKC created some dangerous chances throughout the second half and earned a handful of corners before Danni Konig finally got the visitors on the board in the 81st minute.

That offset FC Dallas’ goal earlier in the second half, when Barrios set up Texeira for his second goal of the night in the 51st minute.

With the win, FC Dallas advances to the fifth round, which will take place June 30-July 1.

The draw to determine their opponent will take place on Thursday, June 18.

FC Dallas will return to league play when it host in-state rivals Houston Dynamo on Friday.

OKC will travel to California to take on Sacramento Republic in USL action on Saturday.