The Dayton Dutch Lions continued their early-round success in the US Open Cup, defeating Schwaben AC 2-0 Wednesday to advance to the third round of the tournament.

The USL Pro side was treated to a cold spring day in Illinois as the hosts were just ready to give their best shot after a 50-year absence from the tournament.

Schwaben AC of the US Adult Soccer Association (USASA) started the game strong, controlling the possession for much of the first half and creating chances early in the game. Jochen Graf, who was a big presence all day for Schwaben, started the scoring opportunities with a nice through ball to James Mack, who crossed itssse side the first corner kick of the game. Captain Mark Blades took it, but could not find anyone on the receiving end. At the 17-minute mark, Joshua Wittenberg put the first shot on goal, flicking a header on frame off a cross from Blades. Five minutes later Mack fired a shot on goal that floated over the top cross bar.

Dayton’s 4-3-3 formation finally led to a counter-opportunity around the 30-minute mark, when Eli Garner ran up the right side and fired a shot just wide. That chance would be a preview of what was to come. Shortly thereafter, Garner once again made a run down the middle of the field as Jesjua Angoy-Cruyff, the grandson of Dutch legend Johan Cruyff, switched from the left flank to the right, gathered the ball and sent in a cross. Garner finished the chance with a sliding strike that beat goalkeeper Eruc Schuett.

Garner continued to give Schwaben trouble throughout the game with his pace.

Schwaben attempted to respond before the end of the half with a strong shot that just missed goal from the diminutive Lepe Seetane and another shot from Graf during a mad scramble in the box. The save of Graf’s shot proved to be Brad Stuver’s best of the day.

Coming out for the second half with a 1-0 lead, Dayton enjoyed more possession as it looked to control the ball rather than counter.

Schwaben almost broke through the Dayton defense when Blades burned by Sebastian Thuriere and drew a yellow after being pulled down from behind. Thuriere’s yellow was one of four for Dayton on the day, while Schwaben was only booked once.

Robert Novak came on for Schwaben in the 58th minute and provided more of a push, especially as Blades played a more withdrawn role compared to the first half. He nearly scored from just outside the left side of the box, but his strike went just wide.

The key substitution came when Dayton brought on the towering Joe Broekhuizen right before taking a corner kick in the 70th minute. The move paid immediate dividends as Broekhuizen headed the corner kick straight down in the box where Angoy-Cruyff was able to get just enough of a foot on it to flick it in. 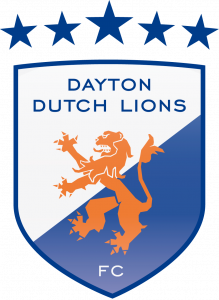 Schwaben pushed hard for the remaining 20 minutes of regulation and roughly five minutes of stoppage time as Dayton once again looked to slow the pace and control the ball after scoring. A few close chances made for some tense moments for the visitors, none more so than Quavas Kirk’s strike from the top of the box that barely the missed the top right corner in the 87th minute.

“I thought we showed a lot of character,” Schwaben coach Tom Cholewa said. “We created enough chances. We should’ve put them away, but we were a bit unlucky. I give our guys a lot of credit. They showed up and battled.”

Dayton midfielder Matt Walker, one of the five players on the Lions roster loaned from the Columbus Crew, said it was a tough game from whistle to whistle and the team was excited to advance to take on NASL side Indy Eleven in the next round.

“It was an extremely competitive game. We knew they were going to give everything they had and they did,” Walker said. “Now that we won we can focus on . I know they’ve been getting good crowds and it should be exciting. It’s what you play in the Cup for.”

Jeff Engelhardt writes for HotTimeInOldTown.com and you can follow him @JWEngelhardt.